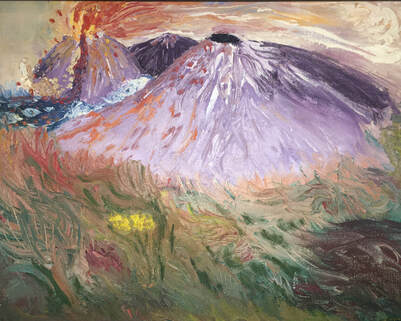 The Three Volcano Painting by Tera

THE LEGEND OF KAPO

Dearest Sister Annie,
I am writing to you from Kona Hawaii on my third week as governess to her Highness Emma Rooke, whom most people call Emmalani.

She walks timidly on the land, almost on tip toes hips swaying gently.   I have never seen Emmalani run, at least not on land.  She skims from her beach chair to the ocean water, slides in, and then she is simply grace incarnate.  Clean even strokes, and at last in the waves, without hesitation she covers miles swiftly and surely.  As governess, I remain on the beach, where the thought the idea of me rescuing my ward is laughable at best.  I leave heavy footprints, each toe discernable in the concave shallows, but in spite of walking right behind her, I see no trace of Emmalani’s passing.  To my thinking, the Mermaids are a Western invention akin to Centaurs of Greek myth.  Lost fishermen and missing sailors gave rise to half human creatures and sea goddesses.  Here in Hawaii, each family honors simpatico creatures, their aumakua.  These beings are not half human, half animal, stuck in between species.  They know they can transform.  I myself have witnessed the elders standing in the waves close to shore and CALLING to their aumakua, chanting in their musical way, raising their arms, an outstretched welcome, and Annie, I tell you, the sharks COME.  I do apologize for the capital letters, but pray you understand that I use them only for emphasis.  You have often inquired as to the native peoples here, especially as regards their traditional beliefs.

As I write this, I have not spotted my ward for quite some time, and am starting to worry.  It is hard to convey how at home Emmalani is in the ocean.  Annie, the water is warm here, bathwater warm, that temperature after the kettle has been emptied, and it is the second child’s turn to bathe.  Neither England nor New England have anything like it.

Thanks be to God, Emmalani is appearing in the distance and moving closer.  Her gait belies her reluctance to be back on land, and once again, she tip toes, dripping ocean water to her waiting servant, holding out a dry wrap.

There is a small church here in Kona made entirely of coral.  Emmalani’s family dwells near Waipio Valley which can only be reached on horseback through rivers and mud and sliding rock.  Her retinue are seen joyfully fording the streams loving the challenge of the journey, almost as though the rough passage makes the destination that much more enjoyable.  These Hawaiians are great athletes, though their sports would terrify our polo players.  Years ago, a great slide or Lua was built down the slopes of Mauna Loa (the Long Mountain) all the way to sea.  Daring boys and girls lay down upon heavy boards and rode many kilometers, picking up speed and once in the ocean, they take to riding the waves.

Honestly, Annie, mermaids are a pale and fragile myth compared to these ocean loving natives.

After a brief delay in writing this letter, I am sitting at a proper writing desk, and intend finishing this letter in time for the next post.  Here it depends entirely upon the seafaring merchant class and the vagaries of tropical weather.

To continue the adventure, after a blessedly uneventful journey home, we are back at Aina Hau, one of the family residences in Honolulu.  While in Waipio, a few of us gathered around the cooling fire to “talk story” with the elders and they told the most shocking tale!  As I have written before, there are numerous gods and goddesses honored here.  Though many in the royal class have accepted our Lord and Savior Jesus Christ, some still practice the old pagan ways.  Once the widowed Ka’a Hu Manu embraced the true God, all the ali’i were put under the tutelage of Protestant clergy.  It is a long and complicated story, but suffice to say, this evening was one of myth and legend, thrilling in its way.

On the island of Hawai’i, there is an active volcano which one can visit and see molten lava up close.  It is like seeing God at his most awe inspiring to witness the creation of new land, Annie, reminiscent of those days when we saw God in the clouds as we laid on the grass in our favorite meadow.  Like when we saw the face of God in the tornado, for is He not gentle and good, and angry and powerful?  But here, the Hawaiians, in their oral traditions and chants credit the goddess Pele with bringing the heat and energy of the Earth’s very core to the surface.  Remember in history class, where we learned of the terrible fate of Pompeii?  How Mount Vesuvius showed no mercy those thousands of years ago?  We have always been able to love the God of the Old Testament, and to accept the love of Jesus as true gospel, while treating some of the stories as parables.

At the Talk Story, I learned that their goddess Pele had sisters, one of whom was called Kapo. This goddess had a most unusual talent.  I am struggling to convey what I heard at that meeting in Waipio for it involves a woman’s’ private parts.  I shall forge ahead and relay that in this story, Kapo’s lady parts were, shall we say, detachable.  There are wild boars in the island, another animal that transforms between human and beast.  They call this the Pig God.  This Pig god is possessed of an insatiable lust, and Kapo, tiring of the constant pursuit, and declaring “is this what you want?”, detaches her lady part, throws it up into a tree, goes about her visits and errands, only to retrieve it later when the Pig God has finished his business.

I know you must be blushing fiercely, and I tell you Annie, it was all I could do to keep from covering my ears.

I believe the story arose from the sight of a lava tube, near the volcano, of the red rusty remains of the molten lava passing through - folding redly outward like, well there is no other word for it – labia – such as a midwife would see while assisting in the miracle of birth.  The medical word.  I mean, a perfect likeness, appearing on the floor of this one tunnel along the volcano coast.

Now I must close and beg you my dear sister to speak no more of this.  I give you permission to burn this letter lest I die of embarrassment upon the revealing of it to any but you.