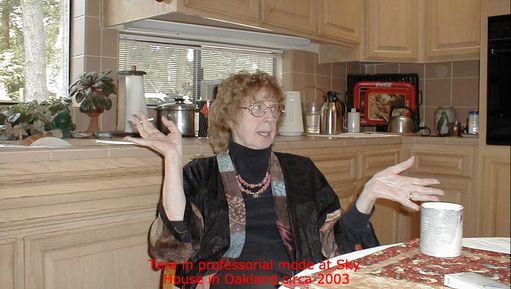 ​She was born Patricia Ann Benjamin, but after the divorce, with the help of her new guru in California, she became Tera, Empress of the Universe.  Some years later, my mother abdicated that throne and gave it back to Gaia.   She had long brown hair, fine like mine, that lightened in the Florida sun.  I have pictures of Mom in her braid – we were kids then.  She wrote a column for the weekly advertiser called Pat’s Patter, and sometimes it was about me and the words I’d invent, like Perk-on for how my mom got going in the morning after the coffee had percolated in the Corning ware pot.  My hair came out white like Angel Hair made of glass, the white clouds of threads that used be on the inside of Grandma’s Christmas ornaments.  You’d cut your finger if you caressed those fluffy balls, then there would be brown specks inside, so we learned to handle them carefully. She was fierce, like me, in love and battle.

It’s been nigh on five years now since Mom died, the daily gut punch is over, but she comes to me in my dreams, vivid, her hand on top of my head, saying soothing words, my port in a storm.  Now even though I know Mom is in a warm gentle place in the universe, where there is no pain, and I surely would not wish a minute more of the bone searing pain of her last days, still, the grieving period for a woman of such magnitude would be longer I suppose, than folks who won’t be missed.

Tera Tripp Treadaway was a real firecracker in her day – sporting a bumper sticker on her Dodge minivan that said “Born Again Pagan”, and another one, come to think of it, that said “Pro Child Pro Family Pro Choice”.  The neighborhoods we lived in in Oakland, California were pretty much of the same mind.  Still, the young men in their starched white shirts would ring the doorbell asking “Have you heard the word of the Lord today?” and Mom would ask them had they read the “Wiccan Creede”?  She would tell them to come on back after they had done a little homework on Pagan beliefs so they could have a real conversation.  She lost that playfulness in those last painful days, but that’s how I remember her.  Gardening in full Halloween makeup, face all painted purple with streaks in her long hair, setting off the neighbors to gossiping and scaring the kids as they walked by.  That was back in Miami – Dade County, home to bible thumping homophobes.  Mom backed me up when I declared in all of my eight year old wisdom, that there was no God.  Grandma’s priest had just told me that un-christened babies go to Hell.  For what?  Babies hadn’t even the chance to do anything bad, what sin could they possibly have committed?  The other kids started sending me home with bibles – no doubt their parents felt the need to save my poor soul.

In hospice, I remember that I knew she was gone, even though her shell remained, grasping a bunched up blanket in her all consuming pain.  I wasn’t there, in the room, when Mom breathed her last.  I sang lullabies to her in the afternoons when the morphine did not put her right to sleep.  Even after fourteen days without food and only mouth moistenings, Tera did not go gentle into that good night.  Stubborn and fierce she left me with no last words of wisdom, since that would have required acceptance.  I remember the ride back from the Oncologist, that last visit – the one with the death sentence, I said
“Hey Mom – we got some good news today”
“Oh yeah honey, what’s that”?
“You can smoke again!”
And we laughed because Mom brought me up to share the family penchant for gallows humor.

She wrote in her bedside diary that upon her death, we were instructed to destroy that diary, so we did.  Mom must have known that the anger she was venting in that last bedside journal was not the real essence.  I wish I had the rest of her writings – they wound up in the hands of my stepfather, who has isolated himself from a world he fears.  Though usually I’m not a material girl, I tend to hoard memories and photographs not valuables.  There is this memento that I would be bereft to lose – her graduation pen, black tip, gold barrel.  Engraved on the top piece that clicks into place both fore and aft is my mother’s chosen name:  TERA.  It came in a velveteen-lined case from the Cross Pen company.  It has a twin that twists to open – that ballpoint pen is for the keeping of accounts.  The Writer’s Pen has a felt tip.  It feels right in my hand, as I write about my aversion to camping.  Mom was so shocked when I stated loudly and dramatically that I hated camping.  As a matter of fact, I went down on one knee, shook my fist at the air and proclaimed in my best Scarlett O’Hara that “I will nevah go campin’ agin!”

It was the ticks.  No, it was the long cold walk to the bathroom in the middle of the night.  No, it was the washing of the dishes made difficult without a proper sink.  And my brother and sister, who were lousy company in the city, and similarly morose now, sharing a tent that we had to put up ourselves, arguing the whole time.  A canvas monstrosity that you had to zip all the way up and all the way down every time you entered.  And no matter how thick the sleeping bags were, the ground was still cold and hard in these makeshift beds.  Couldn’t my parents see that these nice people in Yosemite Valley had built hotels and motels and cabins nearby just so we did not have to build them ourselves?  It was a fifteen minute drive to the Oakland Redwoods from our house if you wanted to commune with nature, they had even gotten married in the Redwood Bowl, with peace pipes and organic bulgur salads, and music under the trees, and hadn’t they gotten over that phase yet?

Many many years later, I photo safaried in Africa.  There, we dwelt in Canvas Villas with running water, copper bathtubs, verandas, indoor and outdoor showers, stationery to write home with, desks and couches, hot water for bush tea, fresh towels folded in the shapes of elephants.  No phones, no internet, that was ok – our wake up call was one of the guides standing outside the steps up to our front cloth door – saying knock knock – not actually knocking of course, because the door was not made of wood, just saying knock knock until we mumbled back.  Every month, at least once, I want to go back to Botswana so much it aches.  I think, though, that my mother would have said that I did love camping after all, and laughed and laughed and laughed.